THE STREETS OF LA ROUE

the streets of la roue

I.
From the red house on the fish quays
where the old harbour was, the plane trees
and the cobbles, in Wednesday drizzle
when thought travels on diagonals, colour
is pure and unlascivious, take the metro
from Sainte Catherine, via Jacques Brel
and Saint Guidon on the Erasmus Line
to Anderlecht – Anderlecht being, myth says,
a rough translation of ‘the love of Erasmus’ –
to find yourself between places, languages,
on the outer ring between city and countryside
where roads abruptly fade into fields, cows,
in a garden city whose streets commemorate
the aspirations of its founders and its people.

II.
La Roue is on the outer ring. La Roue
could have been a blacksmith’s wheel,
La Roue could have been a torturer’s wheel:
spin it – roue, roue, roue, in a backstreet,
a hoop and a stick and here come the twenties,
a little bruiser in his grey shorts, grey shirt.
Here come the pavements, double crocodile
of nuns with their charges, the tramlines, river,
the lake where the children bathed. Here
come the houses, big ones, little ones, four
small wooden ones in a block that in fire
would burn. Here come the Belgian, French,
the Spanish and Portuguese and here come
the old who were born and who live here.

III.
Like an old film star, the lone magnolia
is in flower but this is not Sunset Boulevard,
this is Droits de l’Homme, boasting mailboxes
in metal, wood, tin, most like birdhouses
or those two tiny dormer windows looking out,
perplexed. Where is the postman? Where
are the addressees? Attention au Chien!
C’est moi qui monte la garde ici! But
what does he guard? The cherub urns,
barbecues, slides and trikes, basketball posts,
looking up and barking, the number plaques?
What need for number when each doorway
is marked by its own carefully chosen tree-tile,
wall bracket, weathervane, carriage lamp?

IV.
On Rue de l’Emancipation, parked in a white van,
Façade Express undertakes the cleaning of facades.
For nothing is what it seems. Under the asphalt
run the old tramlines, under the tramlines, damned
for all its sewage to run eternally underground,
what might have been a tourists’ caféside river.
spreads an idyll of ponies, pastures, windmills
and turtledoves flying out of their cages to flirt.

VII.
“… and his joy is in proportion to his withdrawal
from self and his preoccupation with what is
outside himself” our guiding spirit, for I believe
Erasmus himself has been invoked, continues:
“When the soul meditates on travelling without
this use of its limbs, this is certainly insanity.”
And suddenly Soul arrives at a basketball ground
and, not wishing to travel unfingered, unlimbed,
straddles a bench to carve a soulful message:
pour la vie mon bb, invoking the names
of Christel, Souliman, Ismael. Soul kicks
at broken sidelight glass, plastic fork tines
scattered in the dust of Place Ministre Wauters
and asks: “Who ate here under the beeches?”

VII.
On the corner of Rue de l’Energie,
you will find the boulangerie/fromagerie
of Tonton Garby. In a French beret
and moustache, Monsieur Tonton
(whose less energetic brother serves
alternate days in a seven-day week)
holds forth in French, in English.
He has lived here for 43 years,
travelled all over – Oxford Street,
Piccadilly Circus, America (here
he bursts into an American accent)
and once, with his family, to Sri Lanka.
“Come on”, he cried, “let’s do the elephant tour!
Everything, everything!” And so they did.

IX.
“The more perfect the love, the greater
the madness”, Erasmus concludes in his praise
of folly. And folly it is, surely, to come upon
an open space in the Rue des Colombophiles
where, beyond a fence of corrugated iron strips,
car panels, wire fencing, is a flat area of allotments,
well dug but empty of produce save for a few
yellow potato flowers and some far greenery.
Back gardens flaunt chickens and daffodils,
a fine cedar fronting a row of poplars, the chimneys
of the concrete factory, the railway bridge, trains
going to Ghent and, over the fence at the bottom end
of the allotments, helmeted cyclists gliding past
on the canalside like ducks in a shooting gallery.

X.
Doves cooing on the Rue des Huit Heures
bring you to the Plaine des Loisirs. Pleasure,
more folly. Sun sets above the black plane trees
and on a bench this time, ALO MAMAN,
Je t’aime Valentin, are messages from Kelly.
A young one in her mother’s arms, stretching out
a baby arm, is calling repeatedly like the dove,
“da-ddy, da-ddy”. Grass is littered with daisies
and the long thin diagonal shadows of the trees
underline the white lines the daisies seem to follow
like shadow-writing. A blade of a boy in a black suit
with a black dog yanks on the lead, making the dog
snarl and twist and half-leap as if on circus training.
The glittering of the grass swells like waves at sea.

XI.
We’ve come full circle back to Place de la Roue
but this time behind the church, once too small,
now, rebuilt, too big. After all, it’s only a moderate
garden city, swelling with immigrants’ kids:
these two girls, one with bad eyesight and glasses,
both with long brown ringlets, bright blue rollerblades,
legs splayed like young deer finding their legs,
this tubby boy, pushing his sister, Vite, vite!
Two boys bending to their mothers’ headscarved
brows with kisses. And the young Moslem women,
laughing, handling the baby in the pram as lightly,
with as little concern as their mothers before them did.
This little girl in plum, standing a foot away, swinging
her arms violently from side to side like a windmill.

XII.
“A glutton for letters”, Erasmus said of himself,
his humanism trying to unite, above the confusion
of beliefs and races, all the clerics who desired
not to betray the cause of the spirit. In his house
lie a cast of his cranium, fragments of his coffin.
In the Room of Rhetoric, a statue of him stands,
the saint holding back his torn entrails, carrying
carpenter’s tools and hoe, square and compass.
In profile, sharpened quill in hand, studied hands
on an open book, fingers ringed, he sits writing.
He wears three coats, so cold were the winters,
and the black hat from which he was never parted.
Outside, leaf ponds float his adages – UBI BENE,
IBI PATRIA, brass letters half-submerged, rusting. 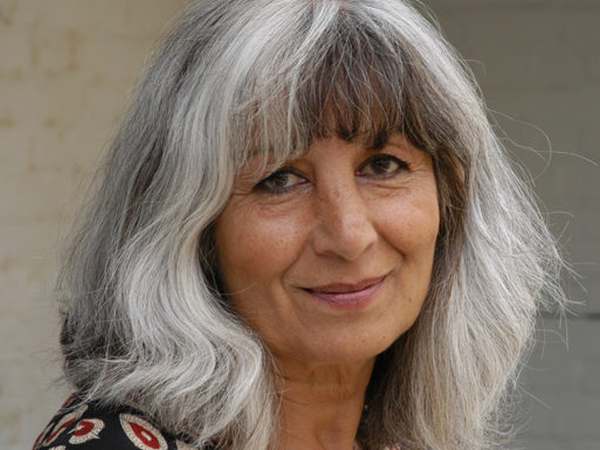 Mimi Khalvati (1944) was born in Tehran. She studied in Switzerland and London and was active for a period in Iran as an actress and theatre director. She returned to Britain at the age of twenty-five and became coordinator of the Poetry School. Khalvati is a poet and children's author and in 1995 received an Arts Council Writers' Award for her poetry collection Mirrorwork. She is currently a guest lecturer at Goldsmiths' College in London, where she also gives poetry workshops. Recent collections and anthologies include Entries on Light (1997), Selected Poems (2000), Tying the Song: A First Anthology from the Poetry School 1997-2000 (2000), The Chine (2002), Entering the Tapestry: a Second Anthology from the Poetry School (2003), The Meanest Flower (2007), Earthshine (2013) and The Weather Wheel (2014).

The Irish artist Orla Barry used the poems of Mimi Khalvati as the basis for her permanent installation, Trees of Circular Motion, on Lustplein. The work consists of eight circular enamel boards that refer to the name of the district, Het Rad (The Wheel). The texts, which radiate from the centre, may also remind one of a diagrammatic map, with streets and squares leading out from the centre.